DLP VS 3LCD: When we compare the both technologies, for projector each of them has specific characters that distinguish it. DLP VS 3LCD Both can choose by the right need required for an individual.

What is a projector?

Projector is an optical device proficient in reproducing images generated by a computer or Blu-ray printer by projecting it onto the wall or any plain surface. The output produced by the projectors are large, hence they are used for a wide screen experience. Projectors can produce the output image through small transparent lens or can produce the image directly through lasers. The newer type projectors use the laser technique to project the image. This equipment made the effort easier and used in wide range of areas. 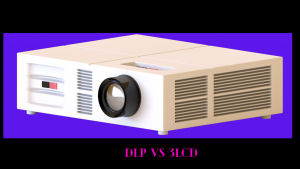 The most common type projector used during this period is called video projectors. The input source available for this type of projectors are video and presented in a screen or wall with help of lenses. Digital projectors find more use today. DLP and LCD are the main technologies used in the projectors. Both the technologies provide similar results but their working is quite different.

While purchasing a projector a consumer needs to consider certain factors like whether it is able to enhance the viewing experience. Number of options are available in the market and need to choose which one deliver the ultimate experience.

Let’s have a detailed discussion about the two and decide which is better.

Digital light processing (DLP) was developed by Larry Hornbeck (Texas instrument) in the year 1987. The projector that used DLP chip to display the projector images is called DLP projector. Millions of tiny mirrors are fixed on the chip which reflects light, to produce picture on the DLP projector. This chip which helps in the creation of picture is called DMD (digital micromirror device). Each mirror in the DMD represents one or more pixel in the projected picture. The movement of this mirrors results the DLP projector to create colours.

Cheaper DLP projectors use only one DLP chip and processes the RGB light in array one after the other. In the other hand 3DLP projectors can process individual beams of light alternatively. Hence, they are efficient enough to produce high quality images.

With the developed technology DLP projectors have similar functions of smart phones or HD TVs. Hence this technology is good enough for an individual for the business and educational uses. Educational area is highly demand for such useful technologies during this modern and technically developed world.

Also, these are not too expensive for an average customer. This is used as home theatre projectors, non-portable vintage business projectors etc.

Most of the LCD projectors use 3 transparent panels for its working. One for red, one for green and another for blue. A 3LCD projector consist of three LCD panels which are transparent. In 3LCD projector there is a prism to separate the primary light. The light from the bulb splits into red, green and blue components. Each small transparent LCD displays their respective colour in which the projectors light then passes through it successively for the projection of an image. Then the light from each LCD gets combined together to create a clear and complete image and appears on the specific screen. This composition takes place before being directed through the projector’s lens.

The modern digital users are found to use the liquid crystal display (LCD) projectors. The 3LCD technology is owned by Epson and get licensed in 1988. The 1st 3LCD projector is known as Epson VPJ 700. This is handy specifically about the ultra-HD resolution projections. In the current period around 40projector brands are working on the basis of this tech.

This is widely used in the educational field for the purpose of lectures. currently the need for such equipment’s is increasing for the video presentation.  Another notable Lightweight LCDs are used in travel purposes to provide a clarified idea about the places.

Another amazing functionality is the prison. It is used in the prison because the sizes can easily get altered or adjusted to the desired levels. Gaming and military area also make use of this projectors due to its picture quality.

The 3LCD projector provide us with superior entry level display. And the light output is usually high in 3LCD and provide more vivid and saturated colours. The both provide a range of good and bad performance it is better choose as per the intention of customer.